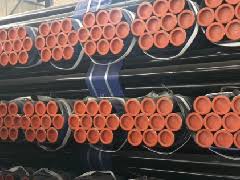 So far, only ASTMA333Gr.8 and Gr.11 steel pipes represented by ferrite-type low-temperature seamless pipes with operating temperatures as low as -196? have been successfully commercialized. For safety reasons, countries have The production and use of tubes have developed special standards, such as EN10216-4 and GB/T18984. From the point of view of use, cryogenic pipes mainly include cryogenic pipes and cryogenic heat exchanger tubes. Compared with the national standard and the European standard that only set a single standard, Japan and the United States have formulated different standards for their purposes, such as JIS for cryogenic pipes. G3460 and ASTM A333, and JIS G3464 and ASTM A334 for low temperature heat exchanger tubes. The production and acceptance of cryogenic seamless pipes in the world mostly adopt American standards, and domestic designs also refer to American standards. Therefore, it is a general trend to produce cryogenic pipes according to American standards. This is not only conducive to the domestic use of American standard design requirements, and realizes domestic substitution, but also Conducive to direct export of products to the international market.