The Birth Of "China's Longest Pipeline" 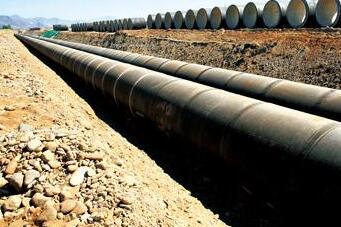 The land from Baotou city to Baiyun Obo mining area is quiet and vast. Underneath it, the Baiyun slurry and water supply pipelines of Baotou Steel, known as "China's No. 1 Pipeline", are like two giant dragons born out of the sky, traversing Inner Mongolia. Thousands of miles of grassland.

The project started on April 5, 2008, after a year of arduous construction. On October 18, 2009, the pipeline successfully sent water from the Yellow River to Baiyun; at 10:48 on January 3, 2010, Baiyunxi Mine's iron concentrate slurry began to be transported.

At 10:30 on January 4, 2010, nearly 3,000 tons of iron ore concentrate slurry from Baiyun Oboxi Mine went through a 24-hour 145-kilometer "long-distance trek" and successfully reached the filtration system of Baotou Steel Plant through a pipeline. The dehydrated ore pulp immediately turns into black iron ore concentrate, and is sent to the comprehensive stockyard of the iron smelter along with the adjusted belt. The "China First Pipeline" is running smoothly.

Looking back at Fendou Road, in this eye-catching project, China Second Metallurgical undertook the construction of 81 kilometers (area from K49 to 130) of the 145 kilometers long pipeline, leaving a strong mark in the magnificent construction history. .

Stand up to the task

Although Baiyun Obo is rich in mineral resources, it is also an arid area with severe water shortage. For more than half a century, within the range of 145 kilometers between Baotou and Baiyun Mine, Baiyun iron ore has been continuously transported to the Baotou Iron and Steel plant by rail and road. Faced with the requirements of expanding scale, increasing production capacity, and increasing efficiency, Baotou Steel has taken a unique approach to find a solution to the problem: constructing a beneficiation plant at Baiyun Obo West Mine, transporting the Yellow River water to Baiyun Obo through pipelines, and then transporting iron ore concentrate through a slurry pipeline Transported to Baotou Steel Plant.

This move can not only solve the problem of Baotou Steel's ore increase, but also break the tailings discharge restriction, but also improve the current situation of water shortage in the Baiyun mining area, save transportation costs, and it can be said to serve multiple purposes.

This is a large-scale project, and it is also a key project for China Second Metallurgical to expand into new markets and establish a new corporate image.

At that time, for the Erye people, the difficulty of the project was really in front of them——

There is no booster pumping station in the middle section of the two pipelines. The urban area and the Baiyun mining area will each have a turbo pump and a pump to the end, which improves the technical requirements of various procedures in the construction;

The slurry pipeline and the water supply pipeline are directly buried in the same trench, which increases the difficulty of measurement, calculation, production and installation of the elbow;

The construction is located in mountainous and wasteland areas, with harsh weather conditions, large temperature difference between day and night, high wind speed, and freezing depth as high as 2.8 meters, which increases the difficulty of construction of work surface sweeping, pipe trench excavation, pipe welding, and pipe trenching;

The 81-kilometer section undertaken by China Second Metallurgical Industry Corporation is the section with the most difficult and dangerous construction area, the most arduous task, and the highest technical content. This section of the road needs to pass through 6 tunnels with a total length of 1.7 kilometers, 6 urban roads, 58 rural roads, 4 railways, 17 gullies, 16 kilometers of rivers, and a pressure detection station 1 The air valve is installed at 4 locations.

In order to ensure the quality of the project, the Baiyun Pulp Pipeline Project Department of China No. 2 Metallurgical Group has formulated strict quality assurance measures to achieve clear division of labor and individual responsibilities, and through technological innovation in the most difficult areas of construction, it has created an amazing masterpiece.

Seamless steel pipe supplier, Nansteel Manufacturing Co.,Ltd understands that solid pipeline transportation is a green and environmental protection professional technology, which has obvious advantages in energy saving and environmental protection. That is zero emissions. The pulp water can be reused in the downstream process, or it can be returned to the mine for recycling, so as to achieve no pollution and no noise. Buried directly underground does not damage the local natural, cultural landscape and residential environment. The ground can also be greened and restored to the original ecology; it can save energy. Can use terrain drop energy to transport.

Digging a trench with a length of 81 kilometers, an opening of 8 meters, and a depth of 4 meters, and then welding and burying two pipelines with diameters of 356 mm and 920 mm are the simplest description of the construction of the slurry pipeline.

However, every detail in the construction process requires the wisdom of the builders, and it is precisely with the technical creation and innovation of the builders that this simple description has a new interpretation.

At that time, the project needed to open six mountain tunnels with a total length of 1698 meters. Due to the severe weathering of the mountain, it is very difficult to support and protect the rock wall of the tunnel. The construction workers are ingenious, wedging steel bars on the wall of the cave, which is called "rooting", and then relying on each "root", using warp and weft weaving method, weaving a dense protective net for the tunnel with round steel. After being sprayed with cement, this protective net became an indestructible "armor", and the surrounding rocks were firmly fixed.

In order to meet the needs of the horizontal and vertical corners of the pipeline in the project, the Second Metallurgical China purchased a pipe bender and supporting equipment for the first time. There are 910 slurry pipes for refrigeration and 910 water supply pipes. Through the research on cold-bending pipe bending technology, we not only mastered the bending of anti-corrosion straight seam pipes, but also conquered the bending technology of anti-corrosion spiral welded pipes, and trained professionals and accumulated construction experience for similar projects in the future. At the same time, they processed and produced elbows by themselves, and adjusted production according to the actual situation on site, which fully met the needs of the construction site without being restricted by external conditions, thus ensuring the construction progress.

"The domestic pipe diameter is the largest, the transportation capacity is the strongest, the unipolar pumping station has the longest transportation distance, and the construction speed is the fastest." At that time, this project was called the four most slurry pipeline transportation project. It was a huge challenge for the builders. It is conceivable. Moreover, the construction period is catching up with the continuous strong wind cooling in the Baiyun Obo area. In the face of unprecedented technical challenges and severe weather, the project department of the Second Metallurgical Group has held several meetings to study the construction plan to effectively solve the practical problems encountered during the construction.

In order to ensure that the welding meets the requirements of the specification, the project department puts the pipeline in the preheating shed before welding, and must be welded in the shed during welding. In the initial stage of the weld, the liquefied gas tank of the ring heater was used to heat it and then it was insulated with heat preservation. In the final inspection, the qualified rate of the welded joint reached 95%, and the qualified rate of some welded joints reached 98%.

In the "men's world" of pipeline construction, Li Fengchun, a female engineer in charge of engineering technology, was fully prepared from the day he received the project. From the collection and sorting of the preliminary data of the project, to the construction organization, field survey and other complicated and cumbersome tasks, she has participated in and reminded herself to be rigorous and rigorous, careful and thorough. In the work, with her unremitting efforts in the early stage, she led the technicians to solve one problem after another and overcome one difficulty after another.

Having been on the front line of the project for a long time, due to unacceptable conditions and overwork, her body showed unspeakable pain, her face was pale, and her figure was thin. But in the face of the difficult task of the project, she couldn't leave. Every day, she dragged her exhausted body around the construction site. She didn't go to the hospital to check her condition until the project was slowed down.

During the hospitalization, she still took the time and insisted on preparing various materials. She was just a little ill. She immediately returned to the site. In order to verify the difference between the elevation of the drawing and the actual measurement, she personally walked the 81 kilometers of pipelines along the route. Finally, based on the construction experience and technology, she put forward about 11 suggestions.

The project manager Gao Xianduo focused on the construction site and walked in the wind and rain every day, carefully planning and reasonable arrangements. Due to year-round warfare, he was admitted to the hospital due to illness. But he was concerned about the project, and after only two days in the hospital, he returned to his post.

Due to the tight schedule and heavy tasks, many war workers who were concerned about the project did not go home for ten and a half days as soon as they went up the mountain, and lack of water and vegetables was a common occurrence.

But every day they lay the pipes in the morning and return triumphantly in the sunset. This is their job. "Do the hardest and do the best", which is their motto, the goal they pursue, and the motivation for forging ahead.

The hard work of the builders finally brought fruitful results. With the operation of Baotou Steel's Baiyun slurry and water supply pipelines, it has once again left an exciting footprint in the history of China's Second Metallurgical Group's proposals.